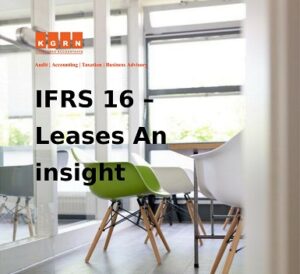 The leases standard is changing the new standard IFRS 16 leases an insight is applicable with effect from January 1, 2019. The requirements of the new standard will have a significant impact on the accounting leases by lessees’ business processes, systems, and controls. The new standard requires elimination nearly of all off-balance sheets accounting in case of lessees.

A new definition of IFRS 16 leases an insight will also include contracts previously treated as “Service Contracts” can now be treated as Lease Contracts. This new IFRS 16 standard also impacts lessor’s business models as lease needs and behavior of lessees change. 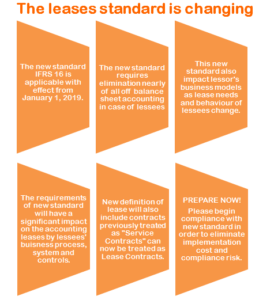 The new standard was issued by IASB in January 2016 with an effective date from January 1, 2019. It requires recognition of nearly all the leases on the financial statements which will disclose their right to use an asset for a period of time and related IFRS 16 leases an insight liability for payments.

Leasing is an alternative approach for the Entities in the nature of financing solution, as it allows using property or equipment without owning it, which results in savings of huge cash outflows at the inception.
The risk of obsolescence and residual value will be eliminated allowing flexibility to IFRS 16 leases an insight.

Under the old standard IAS 17, lessees accounted for lease transaction either as operating or as finance leases. However, this difference no more exists under the new practice promulgated by IFRS 16. All the lessees will have a significant impact on their financial advisory services in dubai statements as the reporting, asset financing, information technology, systems, and process will be undergoing substantial changes. The financial statements will undergo changes in terms of recognition of expense related to depreciation and interest expenses, increased gearing ratios.

IFRS 16 Lessors’ accounting firms in dubai exercise will remain unchanged under the new standard but they may impact the business models due to changes in needs and behavior.

1. IFRS Leases with expiry term of 12 months or less with no purchase option
2. IFRS Leases where the underlying asset has a low value.
Industries affected
Tele-communication
Transport and logistics
Retailors and Equipment lessors

The effect on a new standard will be experienced across all industries, although the impacts may differ significantly. Every industry uses leasing as a means to obtain access to assets, the type and volume of assets that they IFRS 16 leases an insight, and the terms and structures of these lease agreements differ significantly.
For example, a professional services firm leases cars and corporate offices; a utility entity leases power plants; a retailer leases retail stores; a telecoms entity leases fiber optic cables; an airline leases aircraft – all with very different characteristic, terms, regulatory framework, pricing, risk, and economics. As a result, different implications may arise for different industries when adopting the new IFRS 16 standard.

In January 2016, the International Accounting Standards Board (IASB) gave IFRS 16 leases an insight ‘Renting’, which speaks to the main significant update in rent representing more than 30 years. The Standard carries major changes to rent bookkeeping that supplant past bookkeeping that is viewed as never again fit for reason. These progressions become viable from 1 January 2019.

This article considers the topical region of ‘Understanding the rebate rate’. Under IFRS 16 ‘Leases’, rebate rates are required to decide the present estimation of the rent installments used to gauge a resident’s rent obligation. Discount rates are additionally used to decide rent grouping for a lessor and to quantify a lessor’s net interest in a rent.

For renters, the rent installments are required to be limited utilizing either the loan fee certain in the rent (IRIL), if that rate can be promptly decided, or the Lessee’s steady getting rate (IBR). For lessors, the discount rate will consistently be the financing cost verifiable in the rent.

The loan fee understood in the rent is characterized in IFRS 16 leases an insight as ‘the pace of intrigue that causes the present estimation of (a) the rent installments and (b) the unguaranteed lingering an incentive to rise to the whole of (I) the reasonable estimation of the basic resource and (ii) any underlying direct expenses of the lessor.’

The renter’s gradual getting rate is characterized in IFRS 16 as ‘the pace of intrigue that a resident would need to pay to get over a comparative term, and with a comparative security, the assets important to get a benefit of a comparative incentive to one side of-utilization resource in a comparable financial condition’.

The steady getting rate is resolved on the initiation date of the rent. Thus, it will join the effect of noteworthy financial occasions and different changes in conditions emerging between rent origins and beginning.

A lessee should decide a rebate rate for all intents and purposes each rent to which it applies the renter bookkeeping model in IFRS 16. Be that as it may, a discount rate will not have to be resolved for a rent if:

All rent installments are made on (or before) the beginning date of the rent, or

The financing cost certain in the rent might be like the Lessee’s steady obtaining rate much of the time. The two rates consider the credit danger of the renter, the term of the rent, the security and the monetary condition wherein the exchange happens.

Financing cost understood in the rent

The meaning of financing cost understood in the rent is the equivalent for both a renter and a lessor. Since it is situated to some degree upon the underlying direct expenses of the lessor, it will frequently be troublesome and much of the time inconceivable for the resident to promptly decide the loan cost certain in the rent.

For certain IFRS 16 leases an insight, including most property rents, an absence of detail data about the reasonable estimation of the fundamental resource, the normal lingering estimation of the advantage toward the finish of the rent term and any underlying direct expenses of the lessor will make it troublesome or outlandish for the renter to promptly decide the loan cost verifiable in the rent.

In different cases, the IFRS lessee might have the option to get the important data from the lessor during the rent arrangement process. The underlying reasonable estimation of the fundamental resource and remaining estimation of the basic resource may likewise be definite from a dependable outer source. The resident might have the option to sensibly discover that the lessor’s underlying direct expenses would not be noteworthy to the general plan. In renting exchanges between related gatherings, almost certainly, most or the entirety of the pertinent data can be gotten by the renter.

While it is moderately basic for some customary hardware money IFRS 16 leases to make express reference to a loan cost in the rent documentation, alert is justified. This rate won’t speak to the loan fee certain in the rent in the event that it does exclude a gauge of lingering an incentive for the hidden resource or consider the lessor’s underlying direct expenses.

What is promptly definite?

The IFRS 16 leases an insight financing cost verifiable in the rent must be utilized just if that rate can be promptly decided. The significance of the term ‘promptly definite’ is available to some elucidation.

Some of the time, especially in connection to leases of land, the resident uses a valuation master to decide the loan cost verifiable in the rent. In our view, rates dictated by specialists would not qualify as promptly definable and the renter ought to utilize its gradual obtaining rate.

So also, where the loan fee verifiable in the rent must be controlled by including huge assessments and presumptions, a resident would probably reason that the financing cost certain in the rent isn’t promptly definite.

Where the IFRS 16 leases an insight can’t promptly decide the financing cost understood in the rent, the rebate rate will be the renter’s steady obtaining rate. The gradual acquiring rate is a loan fee explicit to the lessee that reflects:

The credit danger of the lessee

The term of the rent

The nature and nature of the security

The sum ‘acquired’ by the lessee, and

The monetary condition (the nation, the cash and the date that the rent is gone into) in which the exchange happens.

What is a lease under IFRS 16?

Since accounting leases under IFRS 16 outcomes in generously all leases being perceived on a lessee’s accounting report, the assessment of whether an agreement is (or contains) a lease turns out to be significantly more significant than it is under IAS 17 and IFRIC 4. Practically speaking, the primary effect will be on gets that are not in the authoritative document of a lease however include the utilization of a particular resource and subsequently may contain a lease –, for example, redistributing, contract assembling, transportation and force supply understandings. Right now, this assessment depends on IFRIC 4; in any case, IFRS 16 replaces IFRIC 4 with new direction that contrasts in some significant regards.

The standard gives a solitary lessee accounting model, expecting lessees to perceive resources and liabilities for all leases except if the lease  term is a year or less or the hidden resource has a low worth. Lessors keep on characterizing leases as working or fund, with IFRS 16’s way to deal with lessor accounting considerably unaltered from its ancestor, IAS 17.

What is the purpose of IFRS 16?

The target of IFRS 16 is to report data that (a) reliably speaks to lease exchanges and (b) gives a premise to clients of financial summaries to survey the sum, timing and vulnerability of incomes emerging from leases.

What does IFRS 16 replace?

IFRS 16 (International Financial Reporting Standard) is another standard for lease accounting which will come into power in January 2019. It will supplant the current IAS 17 lease accounting standard.

Does IFRS 16 apply to property leases?

The IASB has given another leases standard that expects Tenants to perceive most tenant agreements on their asset reports.

Tenants will apply a solitary accounting model for every single tenant agreement (with an exception for transient leases).

Landowner accounting is generously unaltered and the IAS 17 characterization guideline has been continued to IFRS 16.